Recently there has been a lot of publicity on how climate change is becoming a critical issue that is demanding urgent attention. The call is to cut greenhouse gas emissions, most notably carbon dioxide, and to invent new technologies and renewable energy strategies.

Since carbon dioxide accounts for the vast majority of the greenhouse gas emissions most attention has been directed to developing renewable energy technologies that could replace the emissions of carbon dioxide that stems from the burning of fossil fuels in power plants and cement production plants. This led to the development of heavily subsidized technologies such as solar panels, wind turbines, and corn ethanol. However, while these technologies are important, they have not yet directly reduced the key driver of climate change which is the steadily increasing concentration of carbon dioxide in the atmosphere. 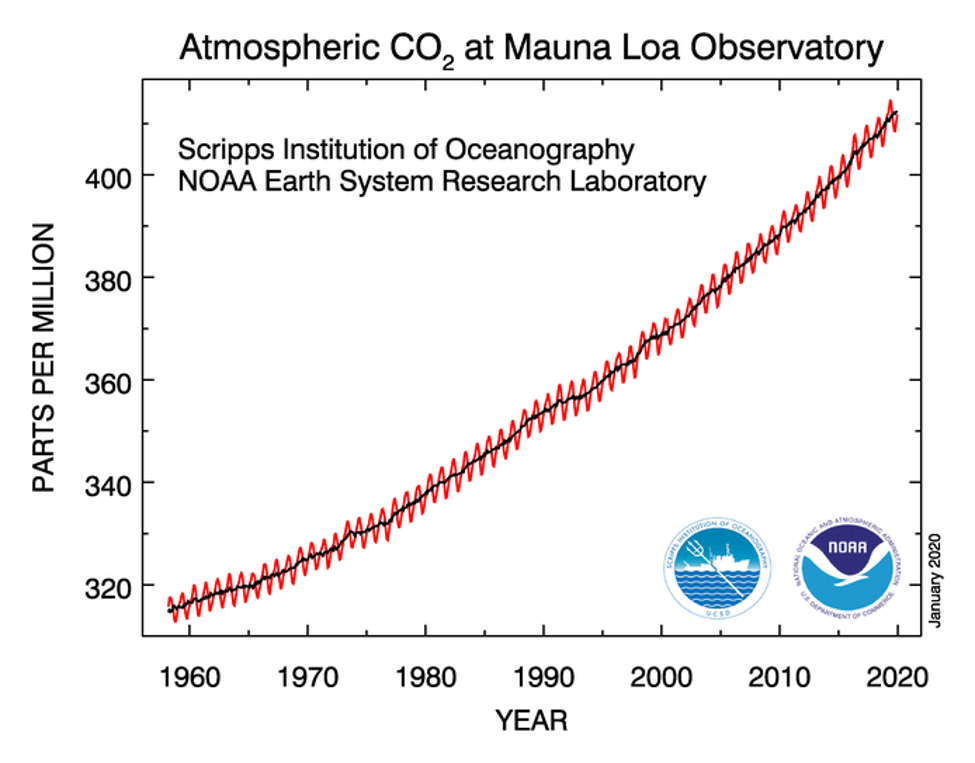 The problem is that these technologies do not in and of themselves remove carbon dioxide from the atmosphere and so far they haven’t even slowed the rate of increase of atmospheric carbon dioxide concentrations.

If we can decrease these carbon emissions we can slow down and eventually reverse the steadily rising carbon dioxide concentration in the atmosphere. The blue line in Figure 2. shows how this might work.

In this Figure the data from 2005 through 2019 is the actual data collected at the Mauna Loa Observatory in Hawaii. As you can see, for the last ten years the rate of increase in atmospheric carbon dioxide concentration has remained almost linear at a rate of 2.40 ppm per year. This corresponds to an average emission of carbon from fossil fuel fired power plants and cement plants for the last ten years of 9.71 GtC/yr (giga tons of carbon per year). Lowering this emission rate by 0.150 GtC/yr would result in an atmospheric carbon dioxide concentration of 456.5 ppm by 2054. This would meet the UN IPCC goal proposed in 2007. 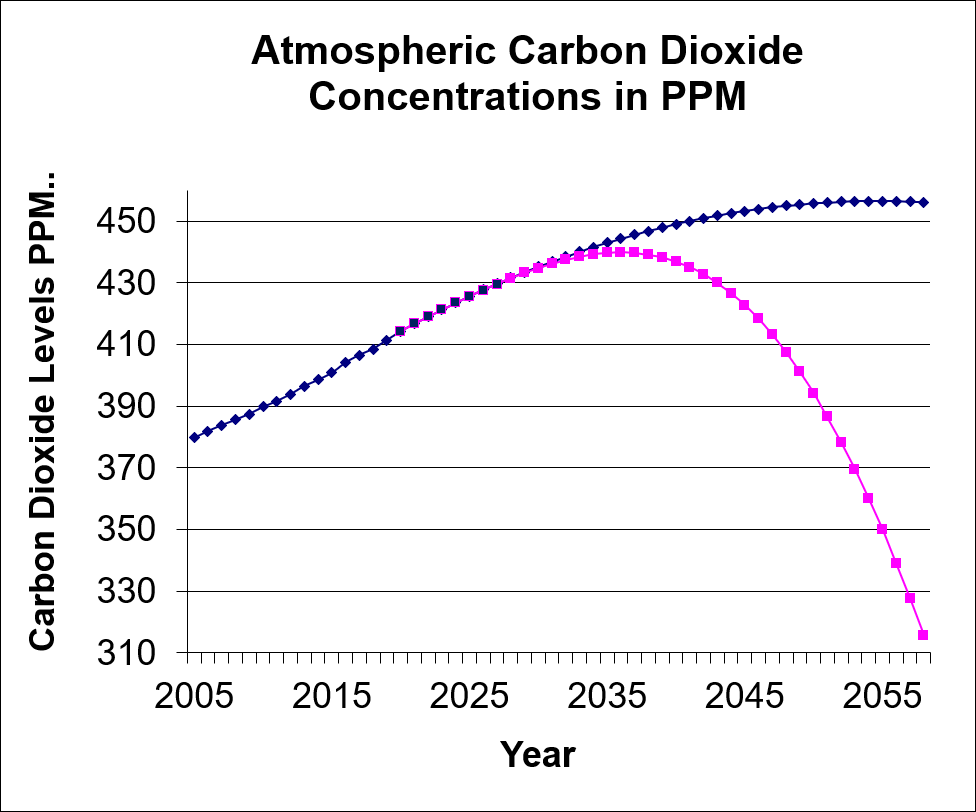 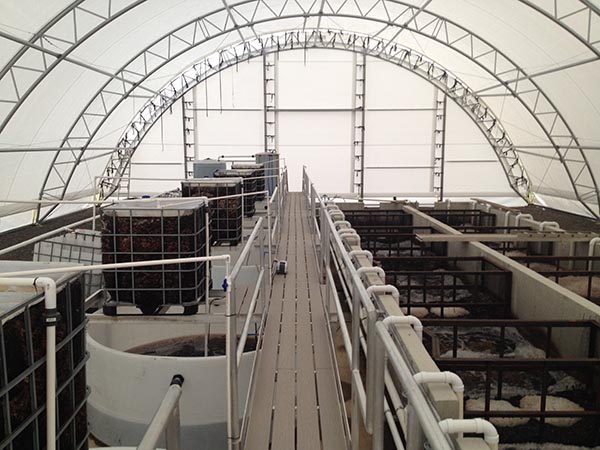 Reducing C emissions to atmosphere from fossil fuel power plants and cement production facilities by 0.15 GtC/yr is a very ambitious program. Given that our track record for the last ten years has shown a gradual increase in emissions it may be somewhat unrealistic to expect that a sudden reversal will occur. However, we are assuming that the current recognition of the climate change emergency may start to reduce this rate of increase by 2021.

Unfortunately, even with this optimistic scenario we will still have future steady state atmospheric carbon dioxide concentrations of 456 ppm, and no one knows what the long term impacts of this would be. A recent proposal to resolve this situation that is attracting a lot of attention is to plant one trillion trees. This could sequester a lot of carbon, but the there are questions as to how to pay for it, who would manage the forests and ensure that they remain as forests, and what would be the impact on agriculture.

Adding the TimberFish Technology to the current programs could resolve these issues and may provide an economical pathway to returning to existing and even lower atmospheric carbon dioxide levels in the future (pink line in Figure 2.)

TimberFish proposes producing a significant fraction of the world’s food from sustainably managed forested land. This could allow the conversion of some existing open forests, savannahs, grasslands, and croplands and back into managed forests over the next 20 to 30 years. As these forests grow there should be an annual net removal of carbon dioxide from the atmosphere. Part of this removal could be used to produce food and part would be sequestered as carbon in the forest biomass. An additional benefit would arise since appropriate management of these forests would greatly reduce the occurrence of forest fires and this would also help reduce atmospheric carbon dioxide concentrations.

The assumption here is that a commitment to the TimberFish Global Climate Change Plan would be made in 2020. This would then continue the existing development and rollout program leading to large scale global implementation of this technology in 2025.

By 2025 the TimberFish Technology could be applied to 51.9 million acres of existing forest and fish production would have begun for that land. During each of the next 20 years, from 2026 through 2045, an additional 51.9 million acres per year of cropland, grassland, open forest, and savannah, could be converted into sustainably managed forest, and the TimberFish Technology would be implemented on this newly reforested land. (Note: only 2.5 million acres of cropland would be converted into forest in any given year.) The cost of this conversion to forest and subsequent food production could be substantially or entirely recovered through the sale of seafood produced on the converted land.

This would reduce the maximum atmospheric carbon dioxide concentration experienced in the next 35 years to 440 ppm in 2036, and we would then return to 316 ppm in 2058. The accumulating benefits of this program would continue thereafter, and it would be possible to reduce atmospheric carbon dioxide concentrations to even lower levels if desired. (Again, see Figure 2. Pink line.)

We know that 52 million acres is a lot of land to convert to forest in a year. For example, the total land area in New York State is about 35 million acres. This raises a question as to whether or not this program is practical or even achievable. 52 million acres per year for 20 years is 1.04 billion acres.

But look at it from this perspective. Our current human population is about seven billion people. Over the last 300 years we have lost over half of the world’s forests and wetlands. But, there are still 12 billion acres of pasture, shrublands, and savannahs that are suitable for reforestation and new forest development. We only need one billion acres of this available land for the TimberFish Program. On a per person basis this would amount to planting trees on one eighth of an acre (less than 6,000 square feet) sometime in the next 25 years. It is manageable.

The problem is that we may need that land to produce food and that is why the TimberFish Technology presents such an opportunity. This technology can produce lots of high protein healthy seafood from forested land without compromising the carbon sequestering capability of the forest, or its aesthetic, biodiversity, and habitat features.

To be successful this will have to be a global effort. Most of the land that will be required is contained in a few big countries with relatively low population densities. The Table below shows the top ten countries ranked in terms of their land area and including their population densities. This is where most of the land is that we will need to use for reforestation and new forestation.

While countries with relatively low population densities have the locations where most of the new forests will be sited, it will also be essential to have the all the countries with high population densities involved in an integral manner with this effort. Growing and maintaining new forests is only part of the program. All of us, and particularly those of us who live in high density population centers, must alter our behavior so that our consumer demand is for products derived as much as possible from this forest based circular economy.

The logical existing organizations to actually implement this technology and programs are the large multinational corporations in the energy, food, and machinery sectors. They have the resources, the organization, the technological expertise, the marketing, and the distribution systems and infrastructure to further develop and implement this new technology. They are also experienced in working with all countries throughout the world. 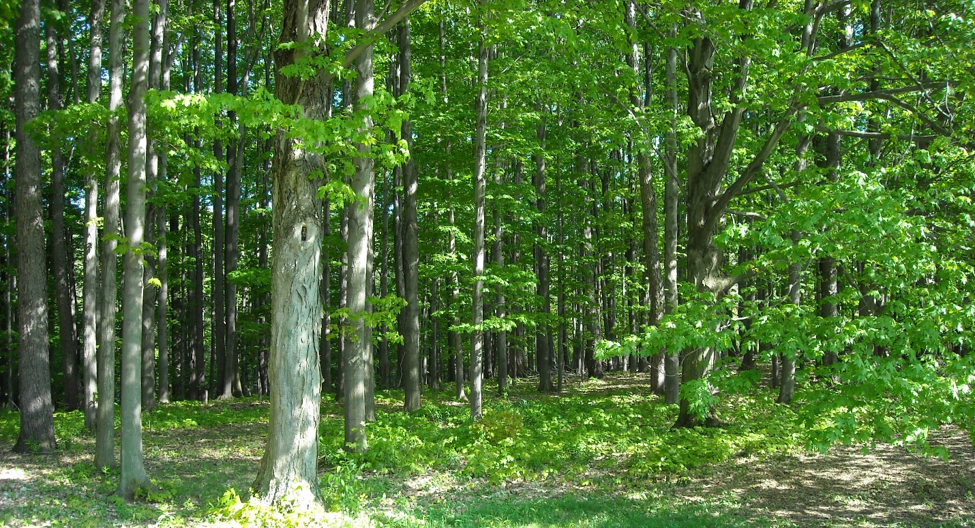 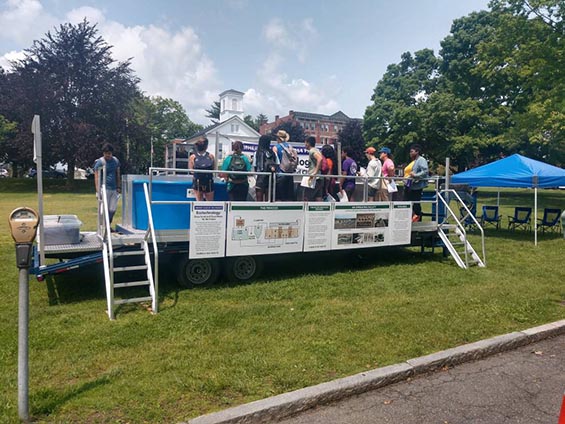 The big multinational fossil fuel companies are aware, as are most of us, that there will not be a long term market for fossil fuel derived energy and products. They facilitated the technology emergence that has created the world of today because we as individuals liked and demanded their products. We like automobiles and trucks, heat and air conditioning for our houses, electricity for lights, computers, cell phones, and appliances, supermarkets and shopping malls. So if we are to resolve Climate Change we all have a responsibility to alter our behavior.

By gradually deceasing the production and use of fossil fuels large corporations can replace their product lines to include the energy and food products that can be generated from a new forest based economy.

But again, we all need to do this together. We as individuals and consumers need to create the demand for these sustainable products. Only then can their work as corporations be combined with our efforts as individuals to successfully continue our human evolution in a safe and sustainable world environment.

This will take a lot of education and thinking for all of us.